Italians use foreign words every day in their language. Walking along the streets, you may hear the words ok, thank you, siesta, chef, and gaffe in any Italian conversation. However, the opposite is also true. Thanks to the success Italian food, fashion, and art has had, many Italian words are known and used very often in English. Yes, by people who never studied Italian. You may even be using them and not knowing they are Italian!

Here are some of the most famous Italian words used in English. However, we must warn you that sometimes the words in English adopt a different meaning from the original Italian.

Italians are well known for their cuisine. So, let’s start with food.

When the wave of Italian immigrants moved to America in the late 19th century, they brought many things. Pasta is at the top of the list. Could they have survived without it? Thus, spaghetti is used in English to identify the Italian dish with noodle pasta and sauce.

Before the Italian immigrants arrived, English speakers already had pizza in their vocabulary. But after immigrants started to prepare their flat dough, tomatoes, cheese, and other ingredients in the States, the word became popular.

Who doesn’t like pasta in the form of sheets? This Italian dish consisting of lasagna noodles, cheese, and meat/vegetables is loved by many. In Italian, the word spelled lasagna (singular) refers to noodles. And lasagne (plural) refers to the dish.

Who has not heard about this white Italian cheese made from buffalo or cow’s milk? It is the cheese used as a topping on pizzas, so you have sure tasted it!

The pepperoni pizza is a classic American pizza. Now the word pepperoni entered English in the early 20th century. And it refers to a sausage seasoned with pepper.

However, this is an example of a word changing its meaning when moving from Italian to English. In Italian, peperoni (spelled with one p) is the plural of peperone which means pepper (referring to the fruit of the compact bush called capsicum). In Italian, peperoni does not refer to the spicy sausage eaten on pizza.

Pistace was a word used in late Middle English, but the Italian word pistaccio (now pistacchio) superseded it. Have you tried this delicious edible green seed? The tree that produces the seeds is also called pistachio.

This Italian soup contains vegetables, pasta, and a wealth of flavor.

Most kids don’t like this variety of cabbage with heads of green or purplish flower buds. But grown-ups love them!

The name of this coffee originated from the Italian word Capuchin. The color of the coffee resembles the color of a Capuchin’s garment. And what a delicious, frothy coffee (made with espresso and milk).

Italians are very expontaneous. And it would not be a surprise that some of their expressions have become viral worldwide.

This expression is used in English to congratulate somebody performing. It would be the equivalent of shouting from our seats, “well done!” However, in Italian, besides meaning approval, it can also be employed as an adjective to define a capable or talented person.

This Italian expression conveys many different emotions: surprise, fear, pain, joy, exasperation, etc. It became a well-known expression in English when the Swedish musical group ABBA released a song with this title. In his book, Björn Ulvaeus, a member of ABBA, says: “The saying ‘mamma mia’ is used a lot in Swedish and is just as well known a phrase as it is in English.”

Some words related to cinema have also entered the international lexicon.

Paparazzi are freelance photographers who focus on taking pictures of celebrities. This word entered the English language in the 1960s from the film La Dolce Vita.

Paparazzi is a plural word since “i” is its last letter. The singular would be paparazzo, with “o” at the end.

Another commonly used expression coming from the cinema is la dolce vita which has spread thanks to the success of Fellini’s film La dolce vita. The phrase describes a frivolous and pleasurable lifestyle, like the one portrayed by the protagonists in the movie.

Another Italian expression famous in English and related to the cinema is spaghetti western.

The spaghetti western is a film genre that refers to the Western films made in Europe during the 1960s and 1970s. These films were financed mainly by Italian companies (hence spaghetti). The characteristics of these films were essentially twofold. On the one hand, the budget. They were films produced at a low cost. On the other hand, they were almost parodies of the classic American westerns.

Florence and renascence have a lot to do with this category. Thus, many Italian words widespread abroad related to music, art, and literature.

Italians invented these dramatic works with multiple acts set to music for singers and instrumentalists. And they became so popular that they exported them abroad. The term entered the English language in the mid-17th century. The building where opera singers perform and the classical music genre are also called opera.

It can mean different things. A scenario is, first of all, the scenery, view, or landscape at any given place. The background in a film is also called a scenario. And even a postulated sequence of events can be cloaked by this term.

It is a musical term that means a performance prepared and executed by one person.

A soprano singer is the highest singing voice.

The term implies a duet in music or entertainment.

Due to the tragedy of the Vesuvius, some words also found their way into English. Here we will mention two of them.

The original word in Italian is vulcano. And it has the same meaning as it has in English. A mountain or hill with a crater or vent through which lava, rock fragments, hot vapor, and gas erupt from the earth’s crust.

The term comes from the Neapolitan dialect/language. It was the way to identify hot molten rock erupted from a volcano.

The most widespread Italian words are those tied to significant events or those related to the most appreciated aspects of the Italian culture.

A person working, studying, or simply on vacation in Italy may have to spell a word in Italian sooner or later. Has this happened to you? For example, your first and last name. When booking a hotel, we communicate information over the phone. When doing paperwork at an office, we usually fill in some forms…. 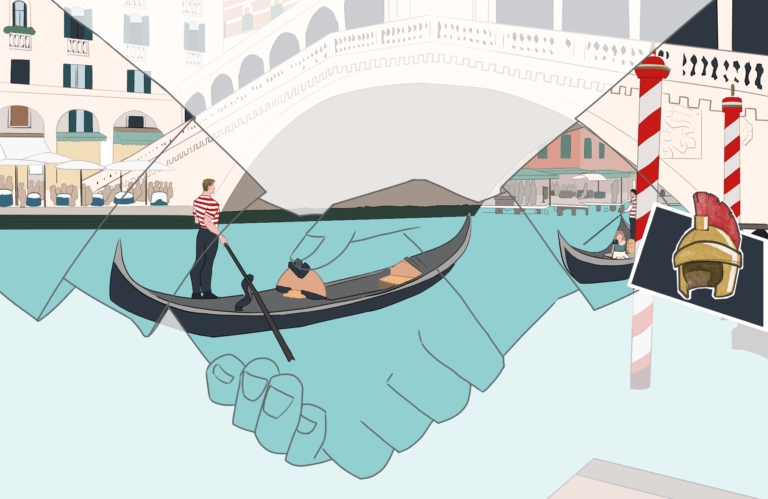 italki dominates the language tutoring space. The platform connects you with language teachers around the world for 1-on-1 lessons. You can practice many languages at italki (even dialects such as Sicilian or fictional languages such as Klingon). When we published this post, you could choose among +320 languages. Plus, there are thousands of teachers per…

There are so many occasions when we need to write an email. And if you need to write one in Italian and have no clue, this is the right post for you. How to start an email in Italian? Italians are not as informal as Americans. And you need to pay attention to this. So,…